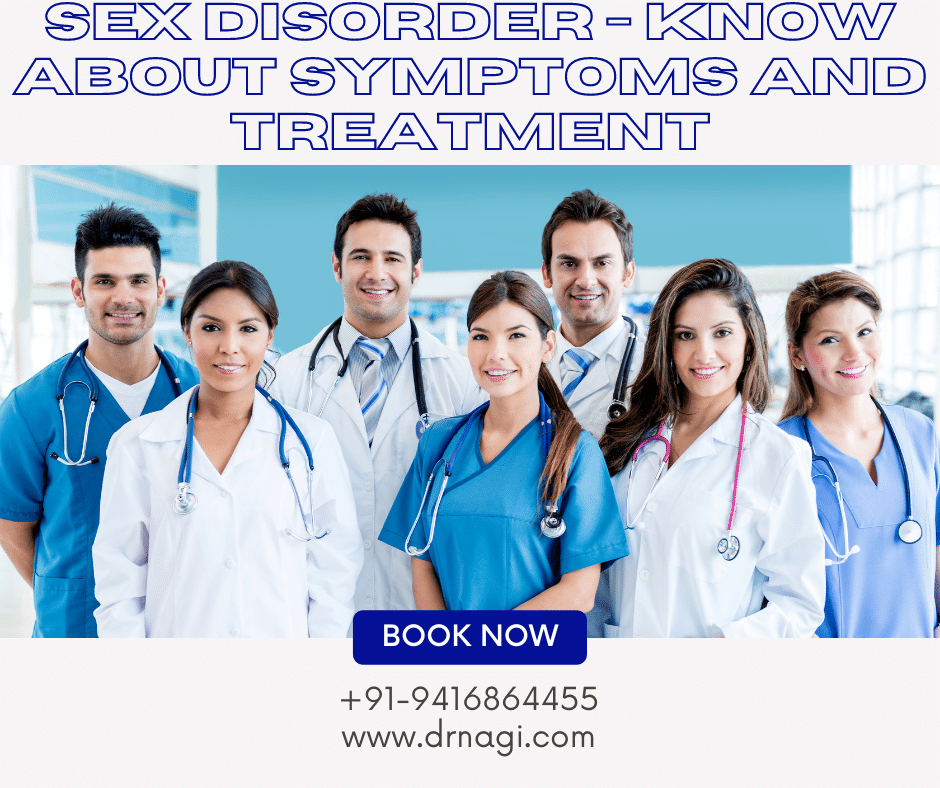 Sexual relationship indeed plays an important role in the growth of any successful relationship. And in that case, if you face any sex disorder issue and didn’t consult the doctor yet, it may cause a huge loss to you and your relationship.

A body needs a lot of care in such circumstances and taking artificially manufactured medicines is somehow increases this risk of damage too. Dr. Nagi the Ayurveda sexologist specialist has some Ayurveda solutions to cure this dysfunction of yours.

Dr. Nagi, renowned senior sexologist an awardee winner of IEA Award and other Merit awards, serves the patients of Ambala, Ludhiana, and Patiala.

Remember it’s anything but a question of disappointment rather it’s something which should be dealt with quite well. A sexologist is one who has some expertise in managing issues related to sexual life and gives better answers for it.

What is sexual dysfunction or Sex disorder?

Sexual dysfunction is an issue that can occur during any period of the sexual reaction cycle. It keeps you away from experiencing satisfaction after sexual connectivity.

The sexual response cycle generally incorporates excitement, orgasm, and climax. Orgasm and excitement are both parts of the excitement period. Somehow, ladies don’t generally go through these stages altogether.

While research recommends that sexual disorder is normal, numerous people don’t care about discussing it. Since treatment choices are accessible and wide, however, you should share your interests with your partner and sexologist.

There are four types of Sexual dysfunction:

Symptoms of sexual dysfunction, both in Men and Women

The symptoms of sexual dysfunction both in men and women are different from each other. The human body reacts in a different way as per gender and sexuality.

Although there may be chances of getting similar symptoms it happens rarely.

It’s not a matter of worry if you are facing sexual issues in your happy life. Don’t let these minimal issues hinder your happy sexual life.

There are a lot of sexual treatments are available in the market and Ayurveda, the ancient treatment is one of them.

When a man or woman is unwell, their energies or doshas become uneven, and Ayurveda practitioners will treat this condition by rebalancing the body energies.

At the point when sexologists treat these symptoms, they may use Ayurvedic treatment that follows up on different causative elements of sexual disorder.

Sexologist says that Vajikarana treatment rejuvenates the components of the body and reestablishes harmony and health. The followers of Ayurvedic medication accept that this process acts as an upgrade or arousal in sexual activity by acting on the hypothalamus and limbic systems of the mind.

Sexologist also says that that Vajikarana treatment may likewise bring down anxiety around sexual desire and helps in increasing some reproductive hormones.

Ayurvedic treatment also includes yoga practice as a cure. Sexologists say that individuals who practice yoga every day may feel less anxious and have improved their sexual reproductive health. People can also improve their sexual life after practicing the sorts of yoga proposed by the sexologist.

Cinnamomum is an important herbal medicine that is usually available in the form of oil. It is said that the use of this may help in proper erection and vaginal lubrication.

The sex disorder is a health issue that is necessary to cure with the passage of correct time. The human may face this issue at any point of their life stage; important is that you should reach to the consultant as soon as possible.

Note: Matter above is not for medico legal use